A Brief History of Early Talking Books and Players

Audio—or "talking"—books are an extremely popular way for people who are blind and visually impaired to read. The BARD (Braille and Audio Reading Download) website is one of several ways that someone can download accessible books. Talking books have evolved over the years, and so too have the machines used to play them. APH's Museum Director, Mike Hudson, gives us a brief history of the first talking books and talking book players.

The first talking books in America were created for the American Foundation for the Blind (AFB) in 1933-34.  They were recorded at 33 1/3 rpm, a format that had been developed specifically for talking books, so that the book would require fewer discs than on the traditional phonograph record of the period, which played at 78 rpm.  Those first talking book records would play on any commercially available phonograph that featured the new speed.  The first talking book produced for AFB was Coleridge's The Rime of the Ancient Mariner.

The American Printing House for the Blind (APH) began recording talking books in 1936-37.  Our first book was Gulliver's Travels.

Almost from the beginning, the AFB released special phonographs they called Talking Book Reproducers.  Essentially, these machines were similar to commercially available models, but were available at reduced prices.  According to AFB literature from 1934, their S-10 model, which was spring powered, sold for $22, and model AC-11 for alternating electric current, sold for $35 plus $2 for headphones.  We have both models in our museum collection.

Later models of talking book phonographs had features like variable speed, tone adjustment, and lightweight arms.  The records themselves evolved from 33 1/3 rpm to 16 2/3 rpm, to 8 1/3 rpm by the 1980s.  The records would always play normally on most modern phonographs, as long as the machine featured the correct rpm adjustment.

Since the 1980s, talking book players have rapidly changed from phonographs to cassette tape players. Now, talking books are on USB cartridges that can be played on digital players. Or, as is the case with the BARD website, audio files can be downloaded from the web onto a thumb drive.

Much has changed since the days of 33 1/3 rpm phonograph records. The future is leading to the complete digitization of talking books, which will lead to even more change for devices for playing talking books.

Thankfully, the Museum of APH takes care of machines like the one pictured below, ensuring that future generations will always know the early history of talking books and talking book machines. 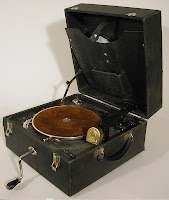