What happened to the recorded World Book Encyclopedia? 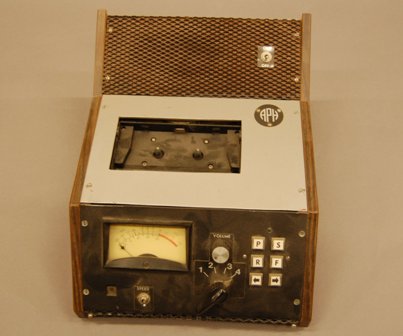 Every so often, we receive interesting questions from visitors that we would like to share with everyone. This question, concerning the recorded World Book Encyclopedia, and its answer, give a great overview of a part of APH history.

"Hi, I was hoping you could tell me what became of the recorded version of the World Book Encyclopedia. I remember using it in school, as best as I can remember it was the 1980 edition or thereabouts. It needed a special kind of player to use it, not a regular talking book cassette player. You looked up in the index (which was a couple dozen fat braile volumes with cassettes in the front and back) and when you put the cassette in the machine you had a couple of dials to turn to the right number/letter combination to find the article you wanted on the four tracks of the cassette. The machine was big and heavy like the books of the index.

I realize that with the internet this talking encyclopedia is obsolete or close to it, but I remember how much I liked using it when I was growing up and I wondered whatever happened to it, whether any later versions were recorded, etc. I cannot find a single bit of information online about it, so that's why I'm writing to you.
Thanks!"

The answer provided by our Museum Director, Mike Hudson:

You've got the date spot-on.  The recorded version of the 1980 World Book came out in 1981 from APH, and it used a special player that allowed you to use the encyclopedia's indexing features.  It was a major project here at APH for several years.  As far as I know, it was the only attempt ever to record an entire encyclopedia in the U.S.  APH put out annual yearbooks, which in the old days was the way that you kept your encyclopedia up to date, until 1985.  At that point, sales had declined, and the product was discontinued.  Although there has been occasional interest in reviving the concept of a recorded encyclopedia, the accessibility of the electronic versions of the various encyclopedias has improved to the point where a narrated version might never happen again.  We have copies of the cassettes and players on display in our museum, and perhaps in the future we may post a sample of the audio on our website.  Good question!