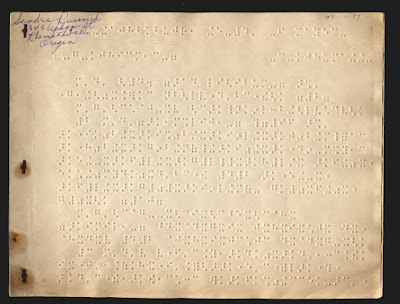 Sheet Music in Modified American Braille
Our artifact this week is an interesting piece of sheet music from around the first decade of the twentieth century, Robert Schumann’s Nachtstucke.  It was donated in 1993 by Sandra Ruconich.  The Printing House used to be a major supplier of braille sheet music, but this isn’t one of ours.  In fact, until the 1920s, all of the hundreds of titles of sheet music from our presses were embossed in New York Point.  Point was a code invented in the 1860s at the New York Institute for Special Education by William Wait and it was used all over the U.S.  Wait saw the utility for reading and writing of dot codes, but thought he could do better inventing his own variation.  In an attempt to make his code less bulky, he assigned the shorter symbols to the most commonly used letters of the alphabet.  In the 1870s, a teacher at the Perkins School, Joel Scott, used the same principle when he adapted a variation of the six dot braille code for America.

Our piece of braille sheet music is embossed in Joel Scott’s Modified American Braille.  If you learned to read at one of the braille-leaning schools in the U.S. in the early 20th century, like Perkins or Overbrook, you could not have read the braille we use today.  Some of Scott’s symbols were the same, for example “A” and “G”.  But many others were entirely different, for instance his “B” used dots 1, 2, and 6.  The U.S. did not begin using the French braille code (as invented by Louis Braille in the 1820s) until we began negotiating with other English speaking countries over what was then called the unified type code.  In 1918, a joint committee of the American Association of Instructors of the Blind and the American Association of Workers for the Blind agreed on a standard code they called Braille Grade One and a Half.

But back to our sheet music.  Since APH did not publish any music in Modified American Braille, the schools that used braille had to emboss their own.  At the Illinois School for the Blind in Jacksonville, IL., the superintendent, Frank Hall, had invented a mechanical braillewriter and a heavy duty stereotype machine in the 1890s.  The stereotype maker punched copper embossing plates.  Schools like Illinois and the Western Pennsylvania School for the Blind  installed their own print shops, and soon after that they were selling braille sheet music all over the country.  When the U.S. adopted Braille Grade One and a Half in 1918, the stuff in Modified American Braille became obsolete overnight.

Three other cool things about this sheet music.  First, most of the music from this period does not have any publisher information.  This piece however has a prominent water mark, “City Ledger,” which was a trademark for paper from the Bradner, Smith & Co. in Chicago, IL.  In the Illinois School for the Blind annual reports, we know their print shop bought all its paper from Bradner, so that is how we know it was embossed in Jacksonville.  Second, we also know from those reports that the printing department was run by a graduate of the school, Arthur Jewell.  He typed up the plates while another worker, Anne Jackson, read to him from the print version.  And third, only the text of the publication was in Modified American Braille.  The musical notation itself was still in Louis Braille’s music code.  No one had been able to figure out a better way to do it, so—probably reluctantly—they used both.

(Note:  the photograph is from the Western Pennsylvania School for the Blind from 1908 and you can see a Hall Stereotype Maker being used in the background.)