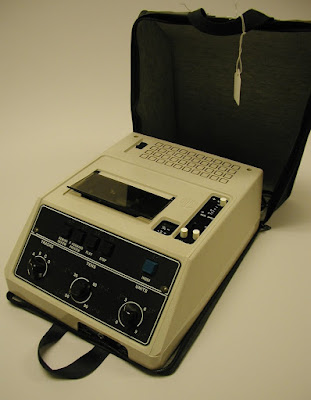 Today's Throwback Thursday item as well as the encyclopedia which is discussed are items I received while in middle school. It certainly shows the amazing changes in the technology we blind people have utilized throughout the years.
Our object this week is an indexing cassette player introduced at APH in 1981.  Sometimes today we take it for granted that information on any topic imaginable is available with a few taps on our smart phone.  Before the internet, you’d have to visit a library and use an encyclopedia to get access to that much information.  There were a number of encyclopedia publishers but the two gold standard sets were—and are still today—


Britannica and World Book.   One of the largest single projects ever undertaken at APH was the production of a recorded edition of the World Book Encyclopedia.  Imagine it, the recording filled over two hundred four-track cassettes—it took up six feet of shelf space-- and you want to find a short article on the island of Guam.  Without indexing technology, you’d have to find the “GR-GU” cassette and fast forward a bit at a time with frequent starts and stops until you found the material you were interested in.  The specially designed cassette player applied a lot of previous APH research on playback technology.  A paper braille and large type index listed the exact location of each article.  Dials on the player let you select a track and location and go directly to the selected article with the push of a button.  It also included variable speed controls for rapid playback, but that was nothing new by 1980.  The project began in October 1978.  Three brand new recording studios were installed in 1979 to accommodate the recording process.  Some of our narrators read nothing else for many months.  Production of the indexing player began in January 1980.  It first appeared in the 1981 APH catalog, packaged together with the recorded encyclopedia, for $1,176.  Later the player was also sold separately, for $791.  Annual yearbooks for the encyclopedia were produced through 1984-85, the last year it was sold.  Incidentally, I talk like encyclopedias are dead and gone, but you can still buy them in both print and digital versions, and both have impressive on-line subscription services.
APH museum APH products APH spotlight Audio Audio books Audio cassettes Audio recording Books Education History - Blindness Students Throwback Thursday

disciple1211 said…
Paul, I really enjoyed reading this article. I remember a recorded, indexed dictionary from that time period but I didn't know that APH actually recorded an encyclopedia, along with follow-up yearbooks. What I do remember is the Braille World Book, which I believe consisted of around 144 volumes. I believe APH did that as well and that was an amazing undertaking. When I was a kid I enjoyed going through those volumes to see what I could locate.
10:12 AM