Throwback Thursday Object: the Pathsounder, an O&M Device from the early 1960's 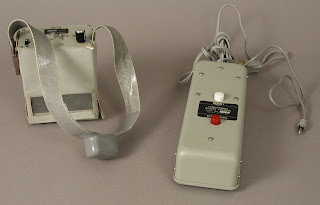 The Pathsounder was invented by Lindsay Russell while working with the Sensory Aids Evaluation and Development Center at MIT in the early 1960s.  It was one of the first commercially available electronic travel aids.  Russell (1927-2000) had worked on radar installations for the Signal Corps during WWII, which led to a career in engineering and work on navigational aids for people who are blind.  The first model to be field tested was Model H in 1968-69.  By 1974, the E model was being made for distribution at the three Veterans Administration Blind Rehabilitation Centers.  Worn around the neck, it was designed as a secondary aid, in addition to the use of the long cane.  It worked using sound waves, shooting them out in front and detecting them as they bounced off objects in the environment.  Emitting a sound(buzzing or beeping), or a vibration (at the chest or neck), or both, it alerted the user to objects within the field of view above and below the waist, in the direct travel path, within a distance of 6-8'.  The Pathsounder was never widely used, although it was widely tested.  Users liked it because it could be worn around the neck, which meant they always had a free hand—many other aids were handheld—and the fact that it could be set to buzz rather than just beep—so users could carry on a conversation with a companion or listen for road noises while using it.  But like many other electronic travel aids, it could not detect drop-offs, it was expensive and fragile, its feedback could be hard to interpret for the average user, and most users found they preferred “just” a cane or “just” a dog guide.

The secondary box is the battery charger.  The size and effectiveness of batteries is a secondary story in the development of ETAs that I find interesting.  The batteries in the earliest models were as large as the units themselves and weighed as much as 20 ounces.  Modern ETAs, such as the Miniguide U.S. use a disposable battery that weighs around an ounce.

This example was donated to the Bledsoe Archives by the Rehabilitation Research and Development Services Division of the Veterans Administration in 1989.
APH museum APH spotlight Assistive devices Audio Canes History - Blindness Orientation and mobility Throwback Thursday