I wrote about Fred Gissoni and Fred Thompson’s Pocketbraille and Portabraille a few weeks ago, but another early accessible computer based on an entirely different model arrived at the museum this week.  Catherine Hula in Lansing, Michigan sent us a Small Talk portable computer.  Fred and Wayne’s machines were cobbled together from standard parts and with their plans you could build one yourself.  The Small Talk adapted a commercially available computer for the needs of blind users.  Bill Grimm, a computer programmer who was blind, founded Computer Aids Corporation in Fort Wayne in the early 1980s, initially working on accessible software for the Apple Computer.  CAC introduced the Small Talk in 1986 and it was distributed by VTEK.  It was one of the first talking portable computers for blind users and included a synthetic speech module, a word processor, and a scientific calculator.  Its memory was stored on micro-cassettes and data was entered on its full feature QWERTY keyboard.  Much of its programming was performed by Doug Geoffray, who went on to found GW Micro and still works in the industry today.  The Epson HX-20 platform it was built on is generally thought of as the first portable computer.  The HX-20 had a nifty internal thermal tape printer, but I’m not sure how useful that might have been for anything except the calculator. 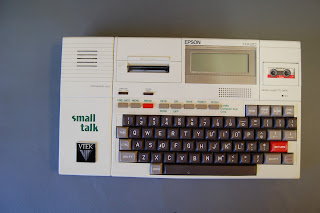