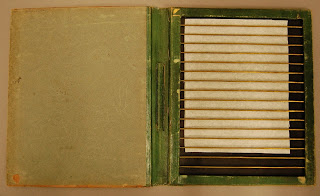 The Noctograph
Our object this week dates back to the days of Louis Braille. And Louis wasn’t the only person who was blind searching for better ways to write. Ralph Wedgwood, an English inventor credited with inventing carbon paper, was issued a patent for "An Apparatus for Producing Duplicates of Writings" in 1806. The device, as described in the patent, is similar to this object, an original “Prescott's Noctograph.”
William Hickling Prescott (1796-1859), an American historian, was gradually losing his vision and invented this device for writing. The writing frame of the Noctograph is wrapped in fine green leather, and features a series of parallel brass wires. Measuring 10 1/8 x 8 3/8 in., it was used with a stylus, instead of pencil or pen.
Carbon paper--thin paper coated with carbon or another colored substance--was inserted between two sheets of writing paper that were placed beneath the writing frame. When the stylus was pressed into the top sheet of paper, the carbon paper transferred the writing onto the lower sheet. The user did not have to worry about inking a pen, or spilling the ink. And the brass guides kept the lines straight. As we’ve noted before, these writing guides were all the rage in the nineteenth century, but became largely obsolete when the typewriter became widely available toward the end of the century. But the dot system of Louis Braille is still going strong.