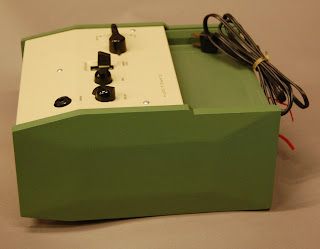 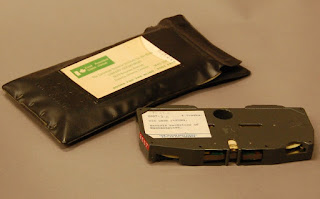 John Clarke and Alec Smith founded a radio repair company after WWII in Surrey, England.  They developed an early cassette based talking book machine in the 1950s.  Their half inch metal cassette was bulky and heavy and the player weighed over six pounds even without it!  But the idea was innovative and one step on the road to the modern cassette form of the 1970s.   The Royal National Institute for the Blind announced in 1960 that its talking book program would switch over from vinyl disk to the C&S cassette.  This machine, using a lighter, smaller plastic version of the C&S cassette was introduced in 1967.  These were used in Britain and the Commonwealth but never in the U.S. (We have included two photos. First photo caption:

The green plastic “Tapette” was 6 x 9 x 10” and had its simple controls on top. Caption for second photo: Black plastic “Tapette” cartridge and a black vinyl mailing pouch.)
Micheal A. Hudson
Museum Director
American Printing House for the Blind