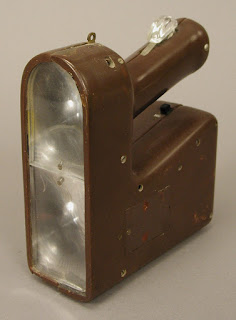 Blind since boyhood, Thomas A. Benham earned his doctorate in electrical engineering from Penn and taught physics and math at Haverford College until he retired in 1976. In 1950, he began working under contract with the Veterans Administration to evaluate the Signal Corps Obstacle Detector, a pioneering electronic travel aid.  In 1953, Haverford subcontracted further investigations to Biophysical Instruments, Inc., whose lead investigator, Malvern Benjamin, worked with Benham to develop three different prototype obstacle detectors based upon the same principles as the Signal Corps model.  All three used reflected light to detect obstacles/objects in the direction ahead of the user.  The G-4 was an early model which apparently never made it past the prototype stage. About half the size of a box of cereal, its brown Bakelite case has two large lenses on the front, a heavy battery in its base, and an angled handle with a crystal knob on the top that would vibrate when an obstacle was detected.  The G-4 is part of the museum’s Warren Bledsoe O&M Archives.