The Academy Award buzz for Meryl Streep and Tom Hanks’ new movie “The Post” caused me to remember that Katherine Graham, the legendary publisher of the Washington Post, visited APH in 1989.  Streep plays Graham in the movie.  Our Throwback Thursday object this week is a photograph from that day, October 5th, 1989.  Legendary APH narrator Terry Hales Sales stands in a crowd of well-wishers shaking Ms. Graham’s hand on our front steps. Terry is looking back at the camera and Ms. Graham has a large flower pinned to her dress.  Our studio manager, Steve Mullins, stands off to the left.  He has the required patches on his jacket elbows.  I had a coat just like it.  At the time Steve was a monitor, what we now call a talking book editor.  APH had begun recording the Talking Newsweek Magazine in 1959—we still record and distribute it today!—and the company was celebrating the 30th anniversary of the partnership with Graham and Newsweek Magazine.  In 1989, our recorded magazines came on flexible vinyl records.  You could wad them up and throw them away after listening. 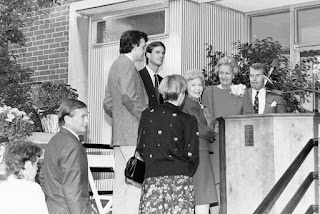