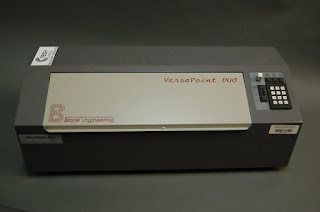 Technology is changing so quickly.  Today’s modern miracle becomes a dusty paperweight almost overnight.  Our museum tries to save these dinosaurs, but the pace of obsolescence and even extinction is so rapid that it is often unclear what is a significant technological landmark and what is an abandoned rabbit hole.  Our object this month, a VersaPoint Duo braille embosser from 2000, turned out to be much more interesting than I initially thought, so I am feeling vindicated about all the other dusty paperweights!
The VersaPoint had its origins in the work of Canadian inventor Roland Galarneau (1922-2011).  I had never heard of Galarneau, but I found an online exhibit that tells his story.  Galarneau, blind himself, completed the first version of his "Converto-Braille" device by 1972, essentially a computer linked to an electric typewriter that could translate print into braille.  In 1982, Galerneau sold the manufacturing rights to his second generation model to Telesensory in California.  Telesensory introduced its version as the VersaPoint braille embosser in 1986.  There were eventually several models.  The "Duo" could emboss braille on both sides of the page, known as interpointing.  In the spring of 1998, Blazie Engineering purchased the blindness (and braille) products of Telesensory, including the VersaPoint. Our example was manufactured under Deane Blazie’s nameplate, although he in turn sold the line to Freedom Scientific in 2001.