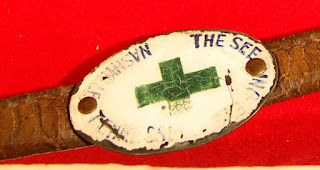 I guess we can call this Throwback Wednesday because we are moving up our regular Thursday blog post to celebrate International Guide Dogs Day.  About ten years ago, I was talking with Mike Meteyer, a field rep for Guide Dogs for the Blind.  I had pulled together a small case of orientation and mobility artifacts, and as Mike and I talked, we started discussing Morris Frank, one of the co-founders of the first dog guide school in America, the Seeing Eye. As the conversation shifted around to Morris Frank’s dog, Buddy, we wondered “where is Buddy’s harness?”  We assumed it would be in the Smithsonian.  It is that kind of artifact, right?  First formally trained dog guide in America, we thought, although later I learned that there was an earlier one, a dog named Lux that was owned by a U.S. Senator. 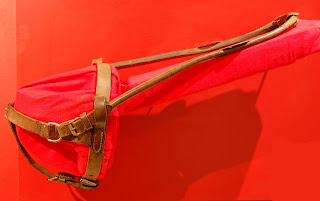 And just as we were wrong about that, we were also wrong about the harness.  A few years later, I found out where it was.  The Seeing Eye still had two of Buddy’s original leather harness sets.  They were not in great condition.  Over time, the leather had dried out and everything was brittle and extremely fragile.  I spoke with one of the Seeing Eye Field reps, Lucas Frank (no relation to Morris), and Lucas put me in touch with the president at Seeing Eye, Jim Kutsch.  I sold Jim on the idea that if he would loan the harness to our museum here at APH, we would have it conserved by a professional.  And a few years after that, we would return the repaired harness to Seeing Eye for their own museum exhibit, and pay to conserve the second harness too.

So today, through the generosity of the Seeing Eye, one of Buddy’s original Nashville era harnesses is on loan to us here at APH.  It is one of my favorite objects on display.  The Nashville name plate dates it to the very first years of the school, before it moved to Morristown, NJ in 1931.  By the way, for those of you who don’t know the story, Buddy’s real name, or her first name, was Kiss.  Buddy was female.  Morris, we are told, did not like the name much and changed it so that he didn’t have to constantly say something like, “Here Kiss!  Good girl Kiss!” all over Nashville. A few weeks ago the harness was featured on an episode ofMystery at the Museum. Buddy helped change Morris Frank’s life, and dog guides still help thousands of Americans at work and play today.