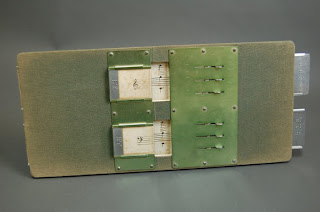 Many of the artifacts in our collection were designed to help sighted teachers work with students that are blind or visually impaired.  Our artifact this week, the Thiberge Auto-Professeur, or “Automatic Teacher,” works the other way around.  Raymond Thiberge (1880-1968) was a brilliant pianist who lost his vision at age nine.  He grew up to be a talented and well respected piano teacher who eventually founded his own school in Paris, France.  Along the way he became dissatisfied with the traditional manner in which piano was being taught, so he invented his own simple but effective techniques.  His teaching machine featured windows with sliding shutters.  With the sighted student seated at the piano, Thiberge would unshutter a window, revealing a single print note, which the student would have but a moment to recognize and strike the corresponding key on the piano.  Thiberge could tell which note would appear in the window, because the card printed with the notes was connected to a corresponding card embossed in braille.  Cards could be switched in and out to help students master all the scales.  He found that the automatic responses he was able to instill in his students dramatically accelerated their mastery of sight reading, although he himself was using no sight at all.  The Auto-Professeur was manufactured initially in 1933 by the American Braille Press in Paris, led by George Raverat.  This example, from about 1950, was donated by Mireille Duhen.


(Caption:  Green linen-covered frame, about 7.5 x 17 inches, with clear windows in the middle revealing music notes on a scale.  A card with embossed braille protrudes on the right.)